Try Delicious Cocktails at Our Restaurant and Bar Latino in Haverstraw

Try Delicious Cocktails at Our Restaurant and Bar Latino in Haverstraw 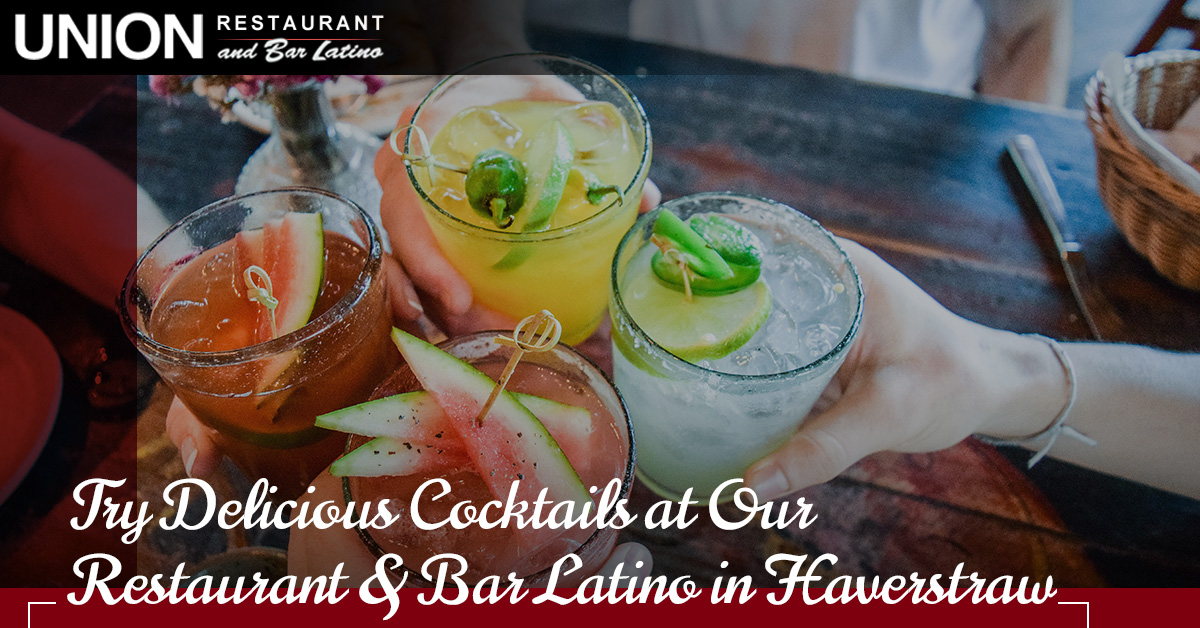 At Union Restaurant and Bar Latino, we believe that a well-crafted cocktail can really enhance a dining experience. Which is why we specialize in creating the perfect cocktails, whether you’re enjoying them with your meal or celebrating the end of a long work week.

Like our food, we make our cocktails with fresh, rich, and tasteful ingredients. In today’s blog, we are going to share some insight on some of the classic cocktails we offer as well as some you have not have heard of yet.

The Pisco Sour is the national drink of both Chile and Peru, and its actual place of origin is something that is hotly contested. Pisco, a clear, fermented brandy has been distilled from fresh musts of Muscat grapes in copper alembic stills since the Spanish conquest and is considered as a cultural heritage in certain regions. This liqueur is also the national spirit of both Peru a Chile, although each country has a distinct history and uses Pisco for different cocktails. This recipe was well known and liked by Ernest Hemingway and Orson Welles.

At UNION, we make great-tasting pisco sour martini’s using pisco, lime, egg white, and bitters. Try one the next time you’re in!

Well-known as the national drink of Brazil, the Caipirinha is a classic cocktail that has gained popularity from all around the world. The alcoholic base for the cocktail is Cachaça, which is made from sugarcane alcohol, derived from sugarcane that has been fermented and distilled. The drink was invented in the early 20th century and once included garlic and honey in the ingredients to cure Spanish Flu.

At our bar latino, we make our Caipirinha with tasty Cachaça, raw sugar, fresh lime and other ingredients that contribute to this great-tasting drink.

Born in the afterglow of revolution, the Cuba Libre (Spanish for ‘Free Cuba’) cocktail came about during a golden time in Cuba–United States relations. Legend says that Captain Russell, a Army Signal Corp officer, walked into a bar and ordered a glass of rum with lime. Parched, he separately ordered a coke with ice and mixed the two together. The drink was so good he ordered a round for his troops and toasted to free Cuba, and the rest is cocktail history

At UNION, we make Cuba Libre cocktails they way they should be; with Bacardí rum, cola, and fresh lime juice. Try this classic cocktail next time you are in.

The Mojito is perhaps one of the most easily recognizable cocktails. The drink has a very interesting past that links back to the 1500s. While many stories about the origins of the mojito exist, the most commonly heard involves Francis Drake and his pirates, when they tried to sack Havana for its gold. While the invasion was a failure, success was found when a mojito-like cocktail, known as El Draque, was invented. This drink was  made with aguardiente (a crude forerunner of rum), sugar, lime and mint. Back then, that recipe was considered strictly medicinal purposes. In the mid-1800s, the recipe was altered and gained in popularity!

UNION Restaurant and Bar Latino has delicious cocktails that go perfectly with our latin fusion dishes. To try some of our classic and new cocktails, visit our restaurant and bar in Haverstraw today!

Lorem Ipsum is simply dummy text of the printing and typesetting industry. Lorem Ipsum has been the industry's standard dummy text ever since the 1500s, when an unknown printer took a galley of type and scrambled it to make a type specimen book.